Blog Series I: Finding Women in the Sources

by Zhanna Popova and Veronika Helfert 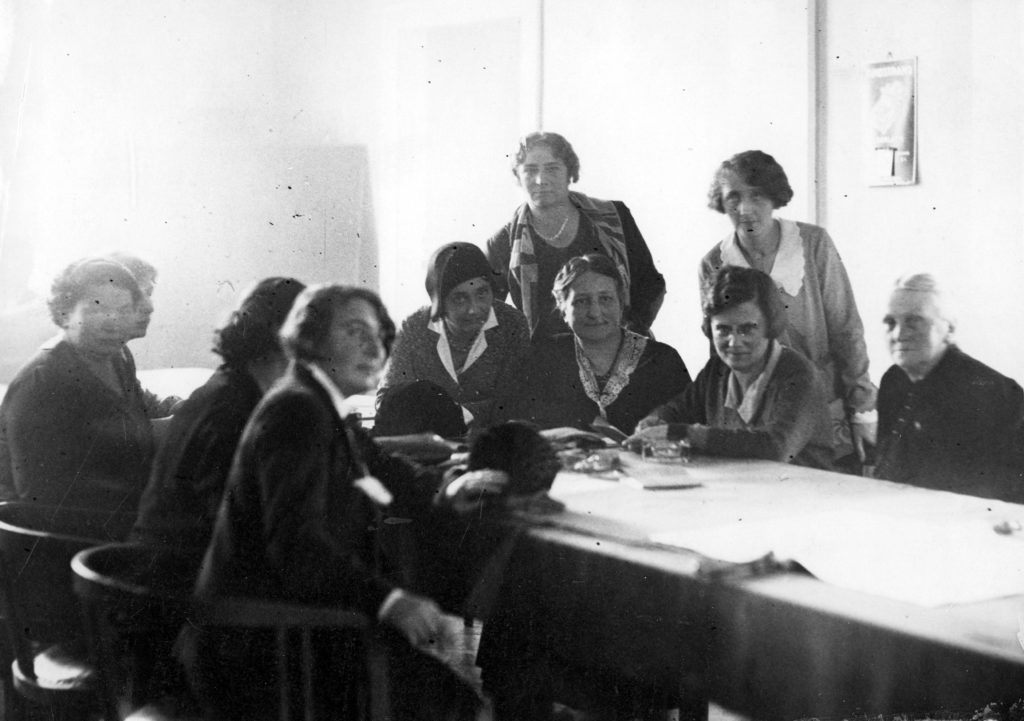 Illustration: A group of female members of the Sejm from the Nonpartisan Bloc for Cooperation with the Government, including Janina Kirtiklisowa, Eugenia Waśniewska, Zofia Moraczewska, Maria Jaworska, and Halina Jaroszewiczowa (1930) via Narodowe Archiwum Cyfrowe

Biography is among the canonical genres of historical writing. It is also one particularly riddled with clichés: too often authors put their protagonists on a pedestal instead of providing a complex, nuanced picture of them as personalities and historical actors. In response to this, recent historiography, especially the feminist historiography, has consistently problematised biography writing. Clare Hemmings, for example, thought extensively about some of the critical issues involved in writing about “larger-than-life anarchist activist and political thinker” Emma Goldman. There are tensions between the historical subject’s own autobiographical enterprise and the archival, personal, and public testimonies. There is a complex mix of emotions that taint biographical writing, ranging from fascination and uncritical admiration to perceived intimacy, which the biographer needs to distance herself from. In short, the relationship between a historical figure and a writer is never a neutral one.[1]

Feminists and historians interested in women’s and gender history have been researching the past and looking for women as historical actors since the nineteenth century.[2] The motivations for this were and are manifold: female socialists have been looking for and presenting them as role models, like the Austrian social democrat Emma Adler who portrayed French revolutionaries,[3] or the many activists and academics in state-socialist countries who published about and popularised socialist and communist women of the past. Feminist historians putting women in the limelight were also creating a counter-narrative to the “history of great men” by writing life stories of important but unknown women.

A researcher who sets out to follow activists puts herself in a complicated position in terms of sources used (check out our previous blog post series on finding women in the sources below). Documents pertaining to lives of individuals tend to be scattered, hard to access, incomplete and particularly partial. While public institutions and organisations often offer voluminous and well-preserved records, only some individuals are preoccupied with creating well-inventoried and curated personal archives. Identifying and locating sources sufficient for constructing life stories of women who were marginalised often proves challenging. Although many women involved in party organisations or women’s movements were acutely aware of the importance of their activity and preserved extensive personal records, engaging with archives of well-known functionaries and feminist intellectuals has its own challenges. A recent study on the German women’s rights activist, Käthe Schirmacher, explored these pitfalls. One such problem, for instance, is the continuous autobiographical “overwriting” that Schirmacher engaged in throughout her life, re-interpreting, omitting, or including facts into her own life story depending on her changing views[4]. Rank and file female labour activists often did not have the time and resources to systematically preserve records.

Despite these difficulties, research on individual women activists can be rewarding. ZARAH as a project evokes the names of two women: the Turkish-Greek trade unionist Zehra Kosova and the Hungarian peasant women’s right campaigner Sára Rokon Tóth. Activists – their lives, their names, their actions, their writings – are of interest to us. The biographical miniatures we will present in the upcoming blog series show why an engagement with individuals can be a worthwhile endeavour. Researchers of the ZARAH Team will zoom in on individual women labour activists who lived and worked in Eastern and Central Europe, also reflecting on the specificities of putting them centre stage in a historical investigation. Even without pursuing a fully-fledged project of biographical writing, historians of labour activism, as we show, can profit from focusing on individuals.

First, focusing on an individual gives the historian a possibility to see them as an acting, thinking, and feeling person. While the tendency to heroise has been (and continues to be) a problem in biographies of women, and especially women activists, the acknowledgment of the often inconsistent and conflicting facets of their personalities and activities shining through when reading of sources carefully can provide a counterpoint to such heroising narratives.

Second, a researcher who puts female labour activist’s actions in the limelight of her study is rewarded with a more inclusive and more complex understanding of activism. Activists often had to make complicated choices in order to be able to pursue their agendas as women and workers. Repeatedly, this meant combining an engagement in male-dominated trade unions with participation in middle-class dominated women’s organisations with the goal of following their class and gender interests simultaneously. A focus on individuals also shows that repertoires of activism could be extremely expansive. They included not only traditional collective action, but a wide variety of activities: smuggling and distributing illegal press and literature, giving musical soirées where singing was intertwined with agitation, organising childcare, creating schools for young women workers or campaigning for consumer boycotts.

Third, following a life story vividly highlights how activists and activism changed over time. Changing contexts meant changing responses to them: evolution of causes for mobilisations, disruptions of the repertoire of contention or access to long-sought positions of power within governments and trade unions. A life story also puts at the forefront not only the policy-related consequences of activism, such as change of laws or creation of new institutions, but also personal consequences of activist engagement, which ranged from empowerment to complete disillusionment and despair.

Finally, interest in a particular activist can also enrich one’s own research perspective. In dealing with a single historical person, their networks might come to the surface, altering the image of male dominated organisations like trade unions. Tracing the activities and writings of a woman may suddenly reveal a range of other women, as addressees of letters, as common speakers at events, as companions in photographs and other personal accounts. Reading their publications may offer insights in a broad range of topics and themes highlighting the fact that women workers had multifaceted loyalties. Studying concrete persons can reveal the connections between different movements (i.e. women, labour and national movements) and might provoke a shift in understanding interconnections between them.

In the coming weeks, ZARAH researchers will give insights into their research projects, introduce key women militants from Eastern Europe involved in different forms of labour related activism and show the perspectives opening up when following their traces.

Finding Women in the Sources: An Introduction to the ZARAH Blog Series I

by Veronika Helfert and Zhanna Popova 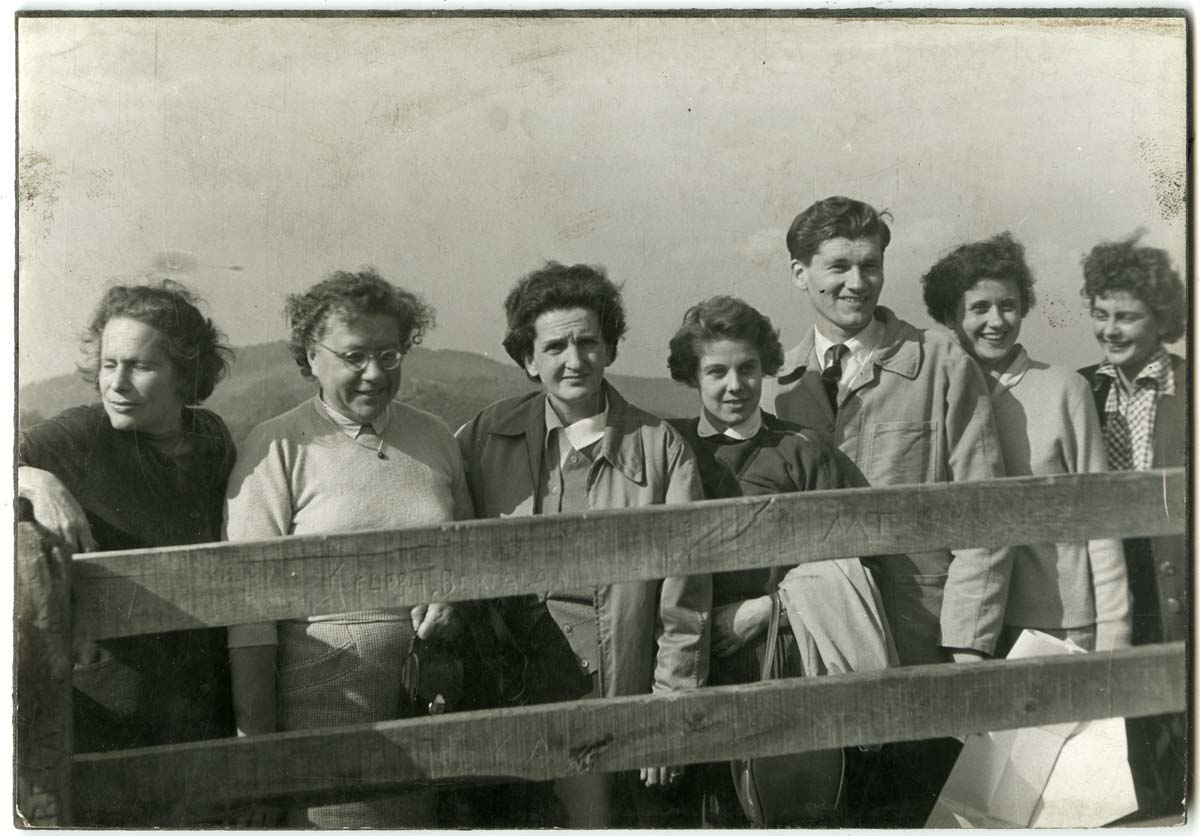 Right from the start of her research, an historian investigating women’s labour activism is confronted with a challenge: sources often tend to focus on men rather than women, even when women were equally active during the described events. Official documents produced by state administration and (international) organisations, as well as press, often omit not only women’s perspectives, but sometimes their presence altogether. Other types of sources are not necessarily more inclusive. An example from the 1913 Dublin lockout illustrates this bias saliently. The lockout, which lasted almost five months and affected up to twenty thousand workers, was one of the most severe labour disputes in Irish history. It attracted international attention and support from foreign labour activists. Bill Hayworth, American socialist and activist of the Industrial Workers of the World (IWW) trade union, visited Dublin during the lockout and was amazed to see what he thought was a familiar acronym – IWW – on banners all over the city. Only later was he told that it actually stood for Irish Women Workers – an organisation that women workers created in 1911 because other trade unions excluded them. The Irish Women Workers’ Union took an active role in the strike that preceded the lockout and fought to mobilise local and international public opinion to favour the striking workers.[1]

With this example, the exclusion of women workers from the mainstream labour movement becomes visible, as they were denied membership in other trade unions at the time. It also highlights a more subtle, hidden bias against women activists that often shaped the sources: even an involved observer automatically assumed that an all-women’s trade union was an entirely different, male-run organisation.

Historians studying women’s labour activism often must  be resourceful and inventive when it comes to sources. Where official records can fail, poetry, songs, diaries, photos, oral history and even documents on household debt can help to better grasp activity of women as labour activists. These sources also show that the narrow definition of labour activism as limited to the workplace does not hold when confronted with the multiple tactics and strategies that women used to achieve their labour-related goals. Such sources underscore the importance of communal spaces and informal communication, organisation of childcare, consumer tactics as activism, and other understudied subjects.

Sources created by women workers in the most vulnerable positions – casual, precarious workers, those involved in “sweating industries” or poor rural labourers – are particularly scarce. Luckily, exceptions can be found. Women workers petitioned authorities to improve their situation. They talked to inspectors and investigators, and sometimes snippets of their accounts can be found in official reports. They also forged alliances with non-working-class women activists who participated in international feminist organisations. For instance, from 1908 on, Mrs. István Bordás, day wage rural labourer and an activist of the socialist peasant movement in Hungary, corresponded with Rosika Schwimmer, a journalist and internationally acclaimed Hungarian feminist. This correspondence also involved other peasant activists, and lasted for many years.[2] The letters tell the story of the fight for labour rights of poor peasant women in their own words.

The aim of ZARAH is to research women’s labour activism in Eastern Europe in its variety and complexity, and bring women activists that were often placed at the margins of labour, gender, and European history to the centre of historical inquiry. In the course of our study, we encounter precious sources that give a glimpse into the experiences of these women, experiences that were unknown, disregarded, or omitted before. The research agenda of ZARAH also includes making such sources available to the scholarly community and interested public via an online database. In order to showcase research in progress, we would like to share here some illuminating sources that we have encountered so far here, on the website of ZARAH. Sources such as these form the indispensable springboard for the thoughtful analysis of the history of women’s labor activism.

This series includes the following posts:

Any cookies that may not be particularly necessary for the website to function and are used specifically to collect user personal data via analytics, ads, other embedded contents are termed as non-necessary cookies. It is mandatory to procure user consent prior to running these cookies on your website.