What can we learn from a short-lived political newspaper meant to be distributed to the employees of a handful of factories?

Solidaritatea: Journal of the Workingmen and Workingwomen of the Tobacco Manufactories and Matches Factories was a four-page, A4 format, bilingual (Romanian and Hungarian) newspaper that was published quarterly by workers from the Cluj Tobacco Manufactory for two years, in 1928 and 1929. Its editors initially claimed it was a „trade publication“ but from the beginning, the paper was published and distributed by labour organizers. By its second issue, the sheet revealed its social democratic trade unionism allegiances. The publication has not attracted the attention of researchers so far.

In 1928, Cluj was the largest city in the province of Transylvania, by then in the Kingdom of Romania, previously part of the Austro-Hungarian Kingdom of Hungary. The Tobacco Manufactory had been founded in 1880 by the Hungarian state. After 1918, the factory was taken over by the Regie of the State Monopoly, the institution which owned all tobacco-processing and match-making factories in Romania. In 1937, the Cluj Manufactory employed 519 women and 174 men,[1] yet in 1928 the numbers of employees were likely higher. At the time, workers in Cluj were emboldened to reconstruct labour organizations, damaged by a decade of government repression.[2]

Labour historians currently working on pre-1945 Romania seemingly have better sources at hand than some eight issues of a meagre factory newspaper. Why reach for this newspaper when the files of the Union of Workers from Tobacco and Match Factories are easily accessible in the Romanian National Archives?

In fact, the modest newspaper reveals a world of shopfloor labour activism of women, one hidden by other types of sources. The existence (let alone the nuances) of women’s interwar labour activism is not easily found in the documents state socialist archivists preserved about Transylvanian social democrats.[3] Women’s labour activism, and its specificities in the context of Cluj’s interwar labour movement, is also difficult to detect in contemporary broad-circulation publications friendly to the social democratic movement.

By contrast, the Solidaritatea‘s small scale enables a larger step forward, research-wise, that these other types of sources. It helps spot and deconstruct the broad historical tendency within the European trade union movement of spotlighting men’s activism (and downplaying women’s) and of symbolically gendering labour activism and organizing as male. Because Solidaritatea covered a small field and chronicled day-to-day struggles in a very specific type of factory, it captured the labour activism of the women who made up the overwhelming majority of the workforce in that trade.

At first sight, labour activism in the Cluj Tobacco Manufactory was of negligible scope. The two documents in the National Archives file dedicated to the Union of Workers from Tobacco and Match Factories refer to activism taking place in the cities of Iasi and Bucharest, far from Transylvania.[4] If something did take place, then easily available sources suggest that would have been the achievement of a handful of politicized male workers. Two men, Francisc Bruder and Nicolae Muntean, wrote and edited the Solidaritatea newspaper. The Hungarian language left-wing press reported that the two men were the organizers of a first meeting between the discontented Manufactory workers and social-democratic trade unionists, in February 1928, with a view to re-establishing a trade union in the factory. After the police broke up the political meeting, Bruder, Muntean and another comrade (Bela Ehrenfeld) were detained while other participants were let go.[5] The short report in a broad-circulation local newspaper and their leadership of the workers’ publication seemingly attests that the two men were the key figures in a social-democratically unionizing workplace.

A closer look reveals a different story. The two men’s claiming key roles in the trade union of a majority-women workplace was encouraged and legitimized by the adoption of the “men of trust” system of representing workers. A short article in the first, August 1928, issue of the Solidaritatea, explained that “the system of delegates (men of trust)” (bărbați de încredere) plays a very important part in the “modern labour movement”.[6] The “men of trust” term was a direct translation of the equally gendered Vertauensman term, used in German-speaking trade unionism, and had broad similarities with the more neutrally-termed shop steward function in British trade unions. In the newspaper, over the next two years, the editors only used the “men of trust” term, fully abandoning the more inclusive “delegates” also mentioned initially.

Otherwise, when not talking about representatives, the newspaper gendered the members of the workforce; Solidaritatea always referred to “working women and working men” of the factory, rather than to the un-gendered “workers”. Also, when discussing social democrats’ historical support for full women’s suffrage, the style of reporting suggested that it was important for women to become electors of those who could properly represent them.[7] Consistently, the implication in this social democratic trade union publication was that women were worthy of representation, but not necessarily worthy of being workers’ representatives.

In practice, women in the trade unions of the Manufactory may have occupied the position of “men of trust”. This interpretation is suggested by an April 1929 report on the unionization of tobacco workers from the city of Sfantu Gheorghe/Szentgyorgy. Solidaritatea reported that thousand workers at a public meeting chose “men of trust” for each section of the local cigarettes factory. The paper went on to list the names of the fifteen men but also of the eleven women chosen for the function.[8] That women labour activists in the period had to and found ways to fit themselves into leadership positions actually designed to be filled by men is also visible in the trade union movement in Austria. In 1930, social democratic female shop stewards there used for themselves the term Vertauensmännin – a grammatically-inventive feminine form of the Vertauensman– instead of a more predictable Vetrauensfrau.[9]

In Cluj, several women could have served as “men of trust” too. The first issue of Solidaritatea published the text of the agreement workers and management reached after negotiations between May and June 1928. At the end of the article, four male workers’ representatives are listed first, headed by Muntean and Bruder. Five women’s names follow, also “on behalf of the workers”: Ana Egri, Elena Gergely, Rozalia Strejan, Iulia Nemere and Ana Oroszi.[10]

Although it is not clear from Solidaritatea if women did become appointed stewards, the newspaper makes visible some women‘s consistent involvement in the trade union. In the letter Ana Oroszi (signing as Mrs. Francisc Oroszi) published in the Solidaritatea upon retirement, the worker narrated her “uninterrupted work of nineteen years” as fully intertwined with her trade unionism and political activism:

“As I leave the midst of workers from the tobacco factory, in the hope that they will keep me a fond memory, I use this occassion to ask all my work comrades to work with all their might for the strenghthening of the trade union, in the future as well, a trade union to whose strenghtening I have also contributed through my modest knowledge and power. […] Although I leave your midst, my thoughts will always be with you. I, even in the future, will continue to walk the good road, the one which takes you too towards a better fate, and a road I will never abandon.”[11]

Oroszi’s retirement statement offers a clue about the language of organizing that senior women tobacco workers would have used to mobilize others, and the kind of motivation and large political vision which drove such women‘s workplace involvement. Considering that the factory’s trade union was founded anew only in 1928, her statement also raises questions about the possibility that some of the Manufactory employees had longer histories of involvement in the labour movement, perhaps in other organizations in the city. Most importantly, the “intimate” genre of the good bye letter, fittingly appearing in a publication connected to a workplace, constitutes a record of this organizer’s beliefs and tactics. Bigger publications would have not found space or interest for a retirement farewell letter, even one as political as Oroszi’s.

What, then, can we make of an eight-issue publication by tobacco workers? At first sight, the newspaper shows that the key organizers on shop floors were men, while women were the organized (and the majority of workers). A closer look, and a transnational perspective, reveals information and a story that cannot be reconstructed from other types of sources. Solidaritatea reveals that women, in Cluj as in Vienna at the time, made space for themselves as representatives, and formally and informally took up the function of shop steward. Put simply, low-stakes publications, oriented towards immediate use rather than with an eye towards posterity, captured a great deal of the activism women engaged in at the of the 1920s, and the particular challenges they encountered in the process. 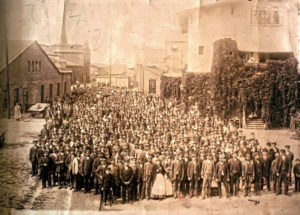 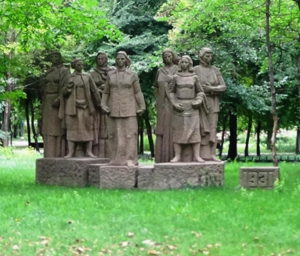 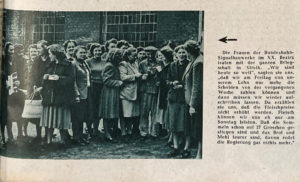